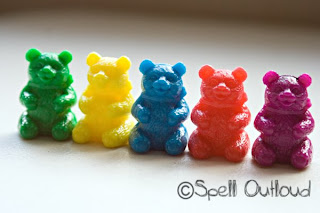 Aren’t these just the cutest bears? Ok, I’ve seen cuter ones too, but these make me happy. I bought my first set for DD#1 almost 7 years ago. I was so excited to have hands-on math manipulatives for her. Math was a struggle for me when I was a kid, and I was determined to give DD#1 a good start. I had high expectations for those little critters. I actually used them with her too. They were used for counting, sorting and modeling word problems. Out of 100 she only lost a couple. Then came DS. He lost over half of them in his first year of life. So I bought another set so that we could still count to 100. I can’t remember actually using them with him, but I’m sure I did—after all that was the whole reason I bought them right?. 😉
Next came DD#2. She’s seven now and I am pretty sure she’s never used them for math. I’ve found them instead in the bathtub, in Barbie’s swimming pool, in Dora’s dollhouse, and in army formations. She and DS have buried them, tied them and even colored them. These bears have grown out of control just like Legos. I’m always stepping on them or washing them in the laundry. Now DD#3 is old enough to start using the bears for sorting. And guess what. Out of 200 counting bears, less than 20 can be found. Maybe that’s a good thing. I’ve had my eye on these little buggers but could never justify getting them since we already had the counting bears. So maybe the end of an era has come– out with the bears and in with the bugs.