We have been doing  color review with my 2.5 yr. old. This past week our color of the week was green! I had my 5 yr. old and 7yr. old help me find green objects from around the house in order to make a special green sensory bin for Lil Pumpkin. 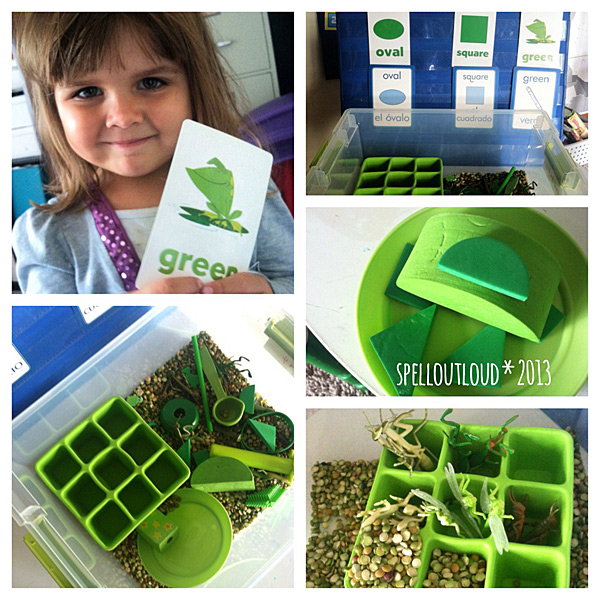 I purchased some cheap color flashcards from the Target Dollar Spot. I set our focus words/concepts up in our (aff) pocket chart. We’re also working on learning some Spanish words too.

What is a sensory bin?

Sensory bins are hands-on tools that help young children explore a concept by using their senses. Bins usually contain a “filler” and objects that invite children to play while learning.

For our green bin, we gathered up as many green objects that we could find. Some of the objects were only thrown in the bin because they were green but others were put in there for a purpose:

— Split peas were added for texture, for pouring and transferring practice, and as a base for all our green objects.

— I had numerous plastic green bugs. I made sure to put more than one of each type. I knew that we could play a matching game, work on visual discrimination, practice counting and more.

— The 9-space bin (baby food tray) was added in order to help organize and classify objects.

— The green measuring spoon was added for pouring and transferring. 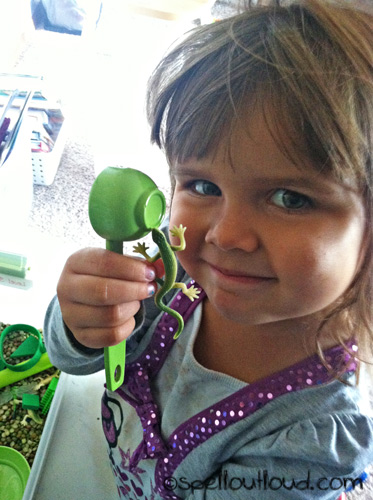 Sensory bins should always be used with parental supervision. For this bin, I did stage a few things in the bin before showing it to my daughter. I hid the bugs in the filler, and I put two matching bugs in one of the squares in the baby food tray. After doing that, I introduced the bin to my daughter. Oh my she was so excited! It was at this point that I realized that I’ve done all these other sensory activities with my other children but hadn’t gotten around to doing anything with her yet! Well that is changing. 🙂 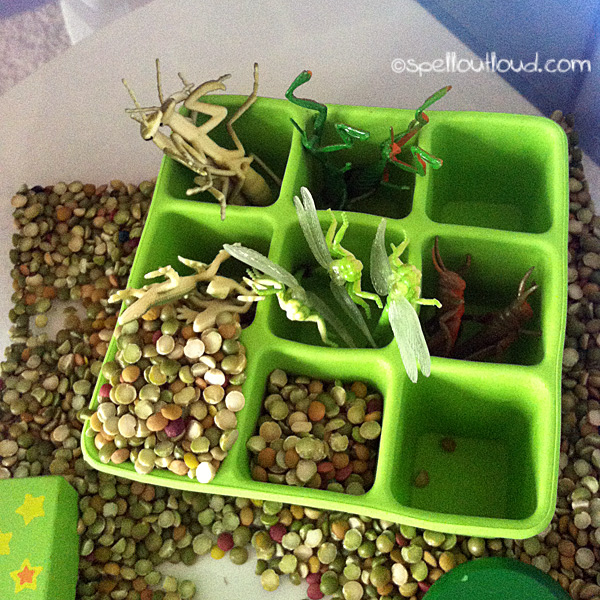 It was fun to see how she used the tray. After seeing the bugs organized, she dug around and found the matches and placed them in the squares. She also enjoyed pouring the peas into the squares. I had added a little green turtle eraser in the bin. She placed that in one of the squares and buried it. Then she would have me look for it. 🙂

Another item in the bin was a green plastic plate. She decided to add any shapes from the bin to it. So the plate also became a way to sort objects.

So what did she think of it? ——- She LOVED it! We played with the bin for at least a half hour. We’ll pull it out a couple more times before switching to a new bin.