You are here: Home / science / nature study / Learning About Frogs and Tadpoles Part 2

We had observed a whole pond of tadpoles a couple months ago and all my kids were fascinated by them. When my 13 yr. old daughter insisted on trying to raise tadpoles, I said sure but that it was going to be her responsibility to keep them alive. I remember when I was a 2nd grade teacher and my class tried to raise tadpoles into frogs. It was hard work keeping them alive! I think out of the 8 we had, only 1 tadpole became a frog. Well I am happy to report that my daughter has accomplished her mission! 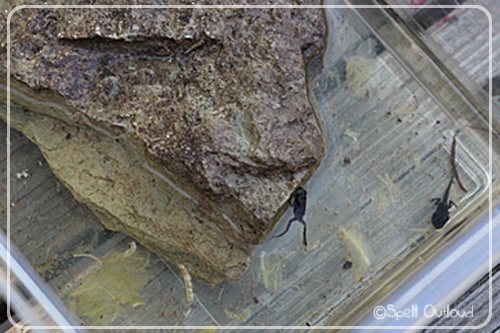 Right now one of the tadpoles has fully changed into a frog. Such a tiny, tiny frog! He likes to sit like a statue on top of the rock.  The other has legs, and its tail is slowly shrinking.  My daughter researched how to care for her frogs. For the tadpoles she boiled  lettuce in chlorine-free water (we purchased AquaSafe which makes tap water safe for frogs) drained,and then froze most of the lettuce. When she needs to feed the tapoles, she takes a small piece and puts it in the terrarium. Once the tadpoles had legs they needed a little more nutrition. She started feeding them blood worms (purchased from the pet store.) 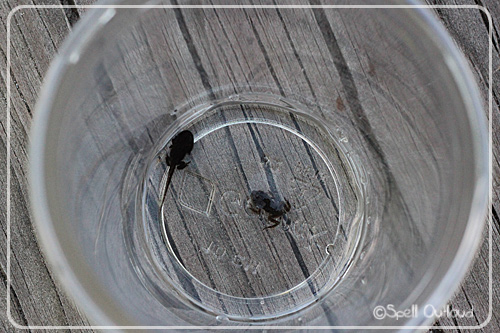 We are beginning to wonder if they are two different species of frogs (or maybe even toads?). The remaining tadpole has always been bigger than the other frog. We were actually surprised to find that the littlest tadpole changed into a frog before the bigger one. We’ll be watching and waiting to see what happens to our frog and tadpole!