You are here: Home / Blogging and Networking / giveaways / Summer Reading with Imagination Station

I was first introduced to the new Imagination Station book series in April during my Birthday Bash.  My 9yr. old daughter has loved these books! So when the next two books showed up in the mail, she couldn’t wait to start reading—and that’s saying something for this particular child of mine. 🙂 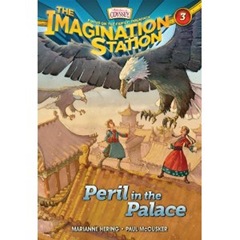 Book three in the Imagination Station series is Peril in the Palace. In this book, the Imagination machine takes cousins Beth and Patrick back to China during the reign of Kublai Khan. They meet up with Marco Polo and end up face to face with Kublai Kahn, who doesn’t appreciate their gifts nor their Christian message.  The cousins are locked up with no way to escape. How will they ever find that golden tablet needed to help Albert? 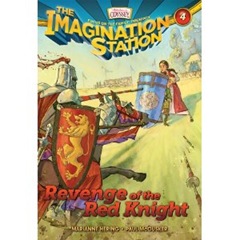 Book 4 brings the cousins to 15th century England where they finally meet Albert—the person they are trying to rescue. Set during the War of the Roses in England, Revenge of the Red Knight will teach readers about the Crusades, the integrity of knights and the vows they took, and why men would choose to risk their lives to fight for Christianity.

The Imagination Station series is geared toward kids 7yrs. and up. The series features the virtual reality device called The Imagination Stations. Only Mr. Whittaker knows how this machine works, but by pushing a button, it launches users back in to time. Each book contains historical facts and Christian truths. The series is written by Paul McCusker and Marianne Hering.

While I am committed to books as a storytelling medium, I think all storytelling should not only entertain but also communicate truth, “ says Hering. “One of the taglines for this series is, “The key to adventure lies within your imagination.” I’d like kids to read these books and have their imaginations revved up so that they become the next generation of storytellers”

One fun component of the books is solving the riddle at the end of the book. By solving, you get a secret code to add on the website which unlocks a freebie. These books are a great fit for children just getting into chapter books, make a good read-aloud for those a little younger, and are a nice supplement to history studies.

Are you interested in getting a set for your summer reading? Well I have one to give away!

Giveaway Rules:  CLOSED
Tyndale House is giving one of you both of these books, Peril in the Palace and Revenge of the Red Knight. (U.S./Canada only) Giveaway open from 6/1 to 6/10 CLOSED
Mandatory Entry: If you could go in the Imagination Station time-machine, where would you go and why?
1. Extra entry: Share this giveaway on Twitter “ Summer Reading with The Imagination Station Giveaway @SpellOutloud http://bit.ly/ifBge4 ”
Please leave a comment below for each entry and make sure there is a way for me to contact you. The winner will be picked by Random.org and will have 3 days to get back to me once contacted.