You are here: Home / PreK-K / Making Volcanoes with Preschoolers

I hope you have been gleaning some preschool science activity ideas during the 10 Days of Preschool Science series. Today Ms. Liz, from Fit Kids Clubhouse walks us through making a homemade volcano.

The Clubhouse Kids have been fascinated with Volcanoes ever since we made our lava lamps awhile back, so for our latest Science Adventure we decided to jump right in.

We started by answering the question, “What is a Volcano?”

Actually, I did the asking and they did the answering. The general consensus was,

“Macaynoes are very big mountains with a hole on top!”

“They are green and lava comes out of them!”

“Lava is red and hot so they spit it out!”

We looked at some photographs in our National Geographic Little Kids Magazine and continued our discussion. The pictures showed a wide variety of volcanoes, so we talked about how they come in different shapes and sizes and can be found all over the world, and even on Mars! A volcano you have to take a rocket ship to go see, now that was a hit! After recording some of our thoughts in our Science Journal, it was time to build a “macayno”.

Each Clubhouse Kid is going to make their own volcano, from start to finish, throughout this week. We also have a variety of other volcano related activities, from drawing them to designing our own lava, planned throughout this time. I have a basic idea how this will all unfold, but ultimately the kids will lead the way.

This is the beginning of one Clubhouse Kid’s volcano adventure… 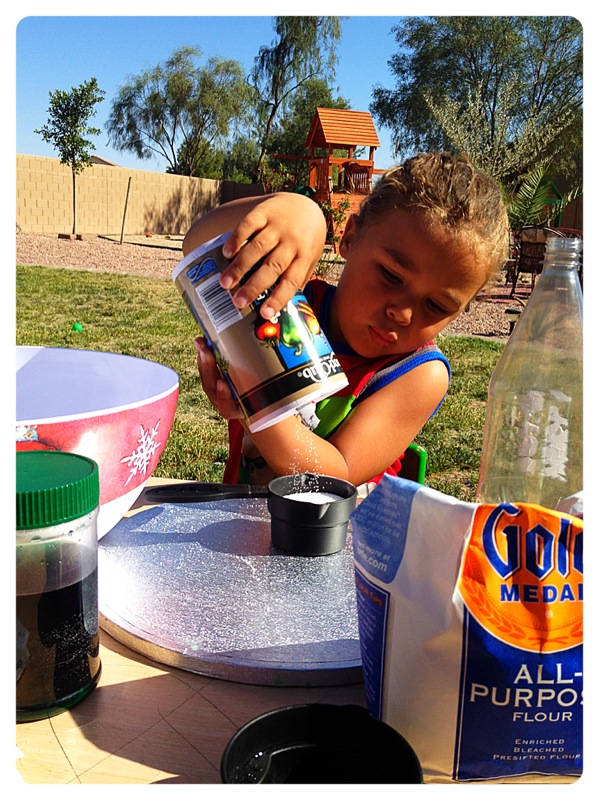 He started by making a salt dough mixture. All necessary ingredients, a measuring cup, and the “recipe” were on the table. He measured out and added one cup of Salt, two cups of Flour, and one cup of warm water, colored green. Green was the agreed upon color for our first volcano. 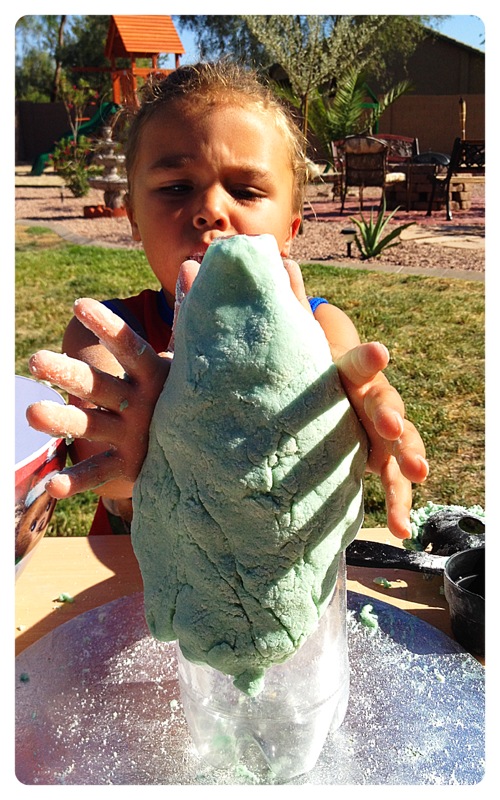 Once the dough was mixed up (he bypassed the mixing spoon and used his hands for that part, of course) he molded it around a plastic bottle. As he was creating he decided “this needs dirt!”, so he moved his creation to our sensory table, which was already full of soil, rocks and twigs.

The volcano was quickly “accessorized” with dirt, twigs and a few rocks. “The rocks will stop the lava!!” Very well thought out indeed. 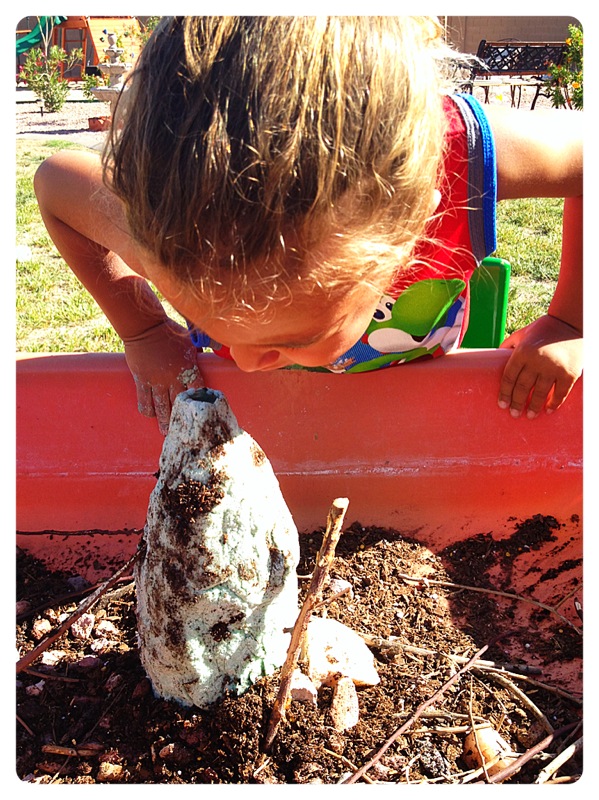 Now that the Volcano was built, he peeked inside to find the lava. When I told him we were going to make the lava, he was thrilled! We talked about what lava is and what it looks like.

“It’s like a river coming out of the top!”

Since we will be making a variety of volcanoes throughout the week, we plan on using different “lava” for each of them. This first volcano was going to be filled up with the infamous “elephant toothpaste” recipe all over the internet. Putting a funnel on top, he added around ½ cup of hydrogen peroxide (3%), a few squirts of dish soap and some red food coloring into the volcano. 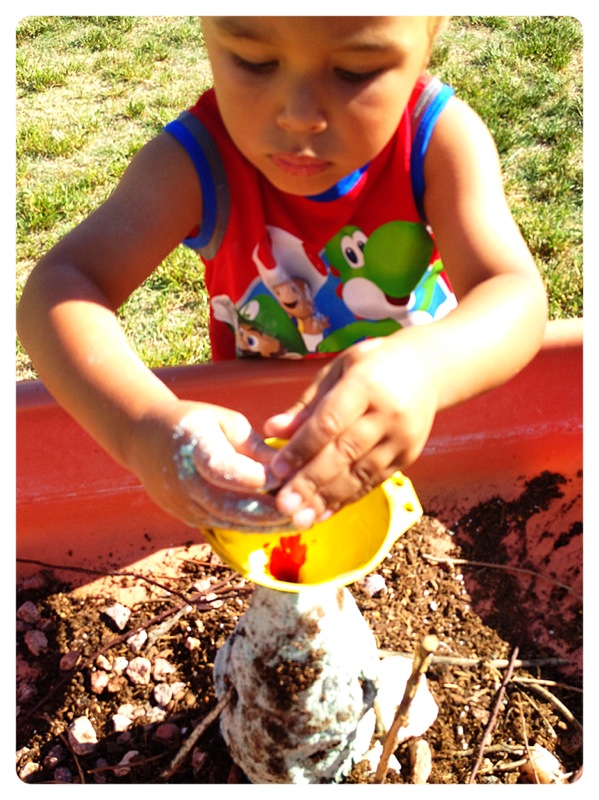 Aside, he mixed a packet of yeast with a couple of tablespoons of warm water in a bottle. This was the “magic” that was going to make the volcano erupt. With the yeast mixture in hand he announced…

“This Macayno is going to erupt in 10 seconds!” 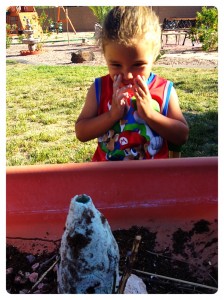 We had a countdown, and then he poured the yeast mixture into the funnel and stood by excitedly expecting. 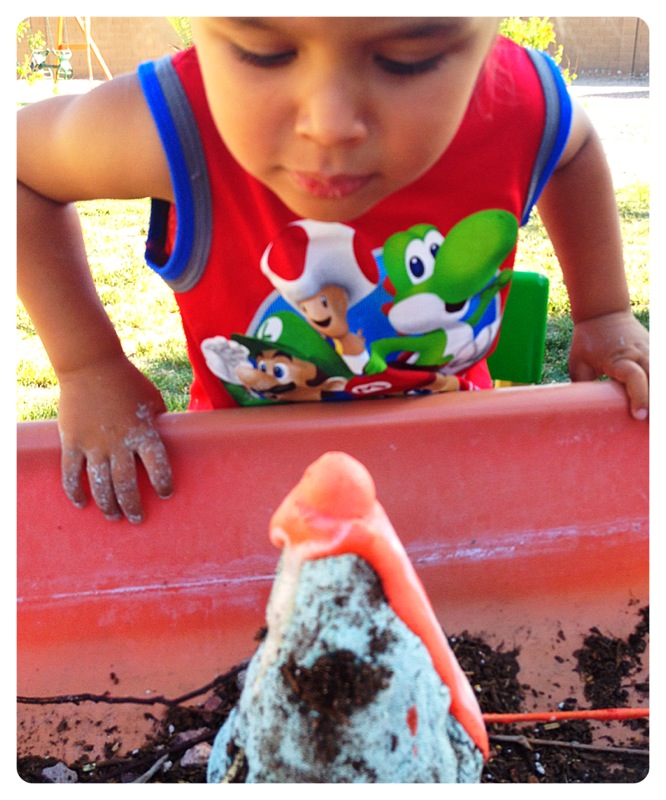 Then he ran across the yard to hide. It is always so fun how absolutely involved the kids gets in our experiments. I have learned that Science with Preschoolers almost always incorporates dramatic play. Suddenly we are hiding in wait by a bush, explorers about to experience the latest, greatest volcano eruption. 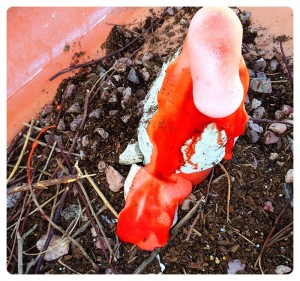 Although this particular lava did not “explode” in eruption, we did get to watch it ooze and flow and even change colors from red, to white, to red again.

In the end, he rushed to the rescue of all of the onlookers with his water bottle. 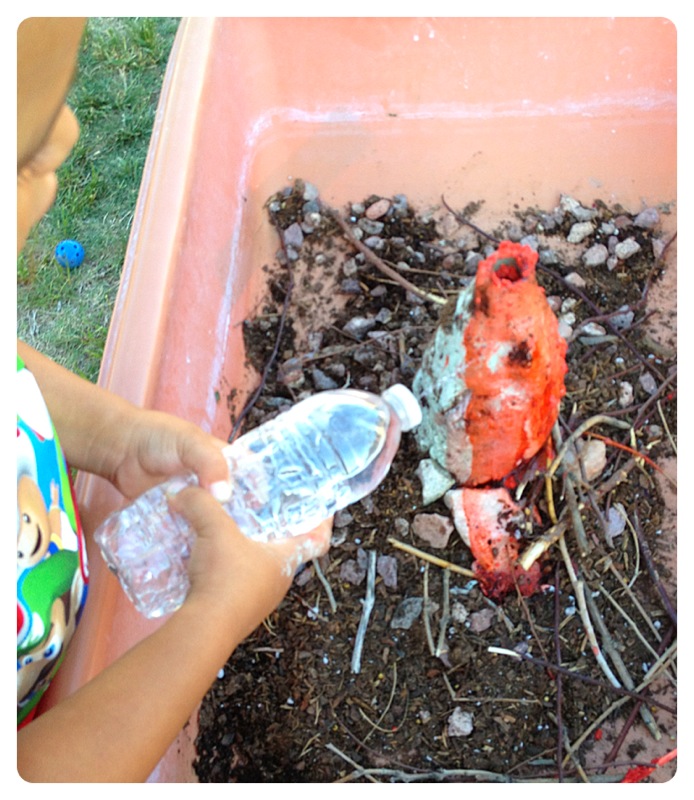 “I need to put this hot red lava fire out!”

Volcanoes, Day 1, was a success! The Clubhouse Kids are eagerly anticipating all of the volcanoes, and lava concoctions, we will explore this week. Judging from their excitement, volcano week may last a little longer than a week, and the sensory tables may all end up being volcano villages. That’s perfectly fine with me, since it means we have finally moved on from all that can be done to hard boiled eggs 😉

Being surrounded by children and elbow deep in play-doh makes me happy. Almost 3 years ago, I became the Mommy who took a hiatus from her teaching career to stay home with my new baby boy. Now, I am the Preschool teacher who can be found running around the Fit Kids Clubhouse singing, laughing, teaching, reading, and always having a good time. Because really, you’re never too old to start a Clubhouse!

The 10 Days Series is organized by iHomeschool Network, a collaboration of outstanding homeschool bloggers who connect with each other and with family-friendly companies in mutually beneficial projects. Visit us on Facebook, Pinterest, and Twitter. And of course, click the image below to visit all the 10 Days posts from these homeschool moms of the iHomeschool Network. You’ll be blessed with tips on how to handle bad days, cultivating curiosity, teaching with Legos, and much much more!